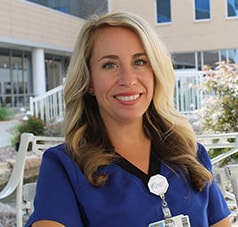 Jennifer Debrock, BSN, RN, started her first nursing job at Saint Francis 13 years ago, but her love for people and their hearts started long before that.

“I always wanted to take care of people,” says Debrock. “Even in high school, I knew I wanted to go into nursing.”

She became fascinated with the heart and all its complexities and chose to focus in that specialty when she came to Saint Francis.

“I knew that there would be ups and downs to nursing, but there are some patients that never leave your heart,” says Debrock.

There were long fought battles that Debrock recalls and that even still affect her today. The tears fell from her eyes as she talked about some of the experiences she had early on in her career.

“You may be working on a patient for hours doing your best to keep them alive and then they’re gone,” recalls Debrock, talking through the tears as she remembers her time back in the operating room and patient floor. “I remember calling families asking them to come in and see their loved ones because there was a chance they wouldn’t make it. There are a few times that I was the only one they had, and I am glad that at least I was there.”

As she takes a deep breath and steadies herself, a look of joy comes over her.

“Then the next day, you get up and do it all over again,” says Debrock. “You do it for the ones you can save.”

It is that very thought and saying that motives her to keep caring for all those who walk through Saint Francis Medical Center’s doors.

“I love what I do and being a nurse brings me so much joy.”

Debrock currently works as the Cardiac Device Specialist at Cape Cardiology Group and cares for patients with Pacemakers and Defibrillators. She is also an avid supporter of the American Heart Association.