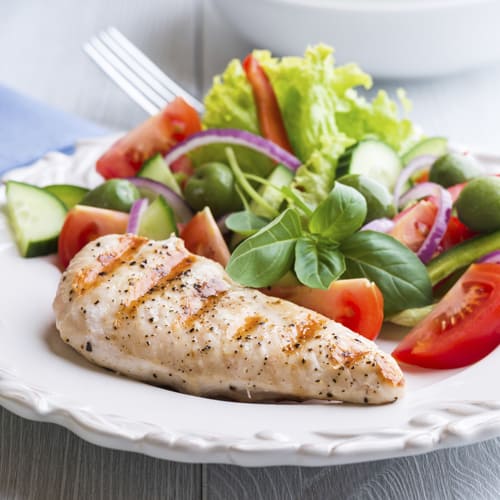 The term portion control conjures up the image of a dieter using every ounce of will power to push away a half-eaten plate of pasta while trying to convince themselves they are “full.” We tend to think of controlling portions as a battle we lose more often than we win. With a bit a planning, however, you can reduce the temptation to binge and avoid that fateful stare-down with your favorite linguini.

Restaurants and their jumbo-size servings can put a dent in your diet. The solution? Ask for a take-home container when you order and have half your entrée wrapped before you start eating. This also gives you a quick, easy meal for later. Or you can split your entrée with a fellow diner.

This goes against everything your mother told you, but it’s true. If you are hungry between meals, eat a healthy snack; that way, you won’t overeat at the next meal.

Keep Serving Plates Off the Table

Dish out your proper portion onto your plate and leave the rest in the kitchen. By keeping the serving dishes out of sight, you are less likely to grab a second helping. This also applies to TV snacks; putting your snack in a bowl rather than bringing the entire package to the couch reduces your odds of overeating

Divide large bags and boxes of food into single-serving portions by repackaging them in small containers or sealable sandwich bags.

Store cookies, ice cream, chips and other tempting foods on high shelves or in the back of the refrigerator or freezer. Store healthy foods at eye level. Replace that tempting candy dish with a tempting (but healthy) bowl of fruit.

These portion control tricks work because they rely on two simple principles: making extra food inconvenient and invisible. In other words, they substitute brain power for will power.