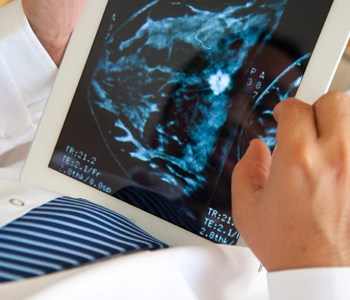 Some people believe that breast cancer is only a five-year disease. However, several breast cancer recurrences happen more than five years after initial diagnosis. Breast Cancer Index (BCI) is a test to help doctors determine the likelihood that certain types of breast cancer will return after five years and whether extended hormonal therapy will benefit the patient.

“When a woman is first diagnosed with estrogen-receptor positive breast cancer (cancer that grows in response to estrogen),

we typically perform tests to map out the
best course of treatment,” says Carlos Robles, MD, medical oncologist/hematologist at Saint Francis Medical Center. “These tests use evidence-based data to predict whether the patient will need aggressive treatment. BCI is a new test that can be performed after successful treatment to help us decide what, if any, further treatment is needed.”

BCI can be performed with the same tissue specimen that was used for the biopsy at initial diagnosis. The medical oncologist sends the specimen to a lab and receives results within seven days.

The test looks for biomarkers, or molecular signals, in the body of seven genes that are specific to that tumor. It places patients into two groups: those who are at low risk for long-term recurrence and those who are at high risk.

“When we learn a patient is at high risk for recurrence after five years, we can continue hormone therapy indefinitely,” says Robles. The drugs used in hormone therapy attach to the hormone receptor in the cancer cell, blocking estrogen from attaching to the receptor. As a result, the tumor does not get the hormones it needs to grow.

Breast cancer is the most commonly diagnosed cancer in women, and it is the second leading cause of death among women. For those who have received a diagnosis of this disease, the threat of recurrence is always looming in their minds.

“BCI is another tool in our arsenal we can use to provide the highest quality care for our patients,” says Robles.