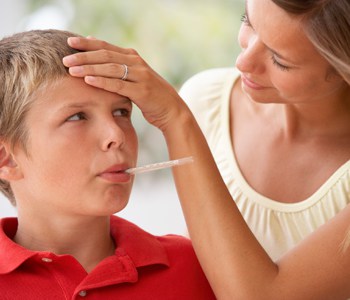 Fifth disease is a viral infection best recognized by the red rash it causes on the cheeks. It is common among school-aged children and is sometimes called “slapped-cheek disease” because children with the infection look as though their cheeks have been slapped. The first symptoms are usually fever, runny nose and headache.

“Fifth disease is usually infectious during the time the child has a fever. Once the rash appears, the child is no longer contagious,” says Joy L. LeDoux-Johnson, MD, pediatrician and internal medicine physician at Saint Francis Medical Center. “The rash can spread to the rest of the body over the course of one to two weeks. Usually, it does not pose any risk to children, except for those who have a weak immune system. Your child may itch, but symptoms will disappear after a week or two. The child may also develop joint pain, but this is less common in children.”

Call your doctor if the rash lasts longer than five weeks or becomes purple or painful. “If your child seems to be quite ill, he or she may have another, more serious problem,” says LeDoux-Johnson.