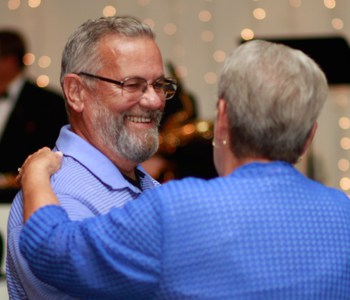 Five years ago, Steven Berry could not even walk, let alone dance. “Every time I put my foot on the ground, it hurt so much I could hardly stand it,” says the Buncombe, Ill. resident.

After undergoing a total knee replacement at Saint Francis Medical Center in 2010, Berry is lighter on his toes than ever. At the Center for Joint Replacement and Revision’s annual dance June 5, Berry, now 70, was among the most active people on the floor.

“Our ‘graduates’ enjoy getting together each year, comparing experiences and celebrating their new active lives,” says Brian C. Schafer, MD, orthopedic surgeon. “The dance is a celebration of our patients regaining their mobility and having an improved quality of life.”

When Berry was in pain, he heard about Saint Francis’ program and talked to staff members. They said he needed to exercise for a month prior to surgery, building up his leg tendons and muscles so the road to recovery would be easier. “That made all the difference,” he says. “I was terrified before I talked with them, and they put me at ease. They knew what they were talking about.”

After his surgery, Berry was so pleased with his experience he told anyone who would listen, including his neighbor, who underwent a total knee replacement at Saint Francis just a couple of months later.

Every year at the dance, Berry and his wife, Marilyn, enjoy talking with other “graduates”. Some of who were there at the same time he was, and others he met at prior dances. “We are all like a family there,” he says. “We ask each other how we are doing, and trade stories about any challenges we have experienced after our surgery. We offer moral support for each other.”

Berry says he appreciates how the staff personalized the experience to him and treated him like a well person who just needed to get back on his feet. “I was more than just another surgery patient, I became part of their family. Saint Francis made me who I am today and if I had to do it again, I would be back there in a minute,” he says.