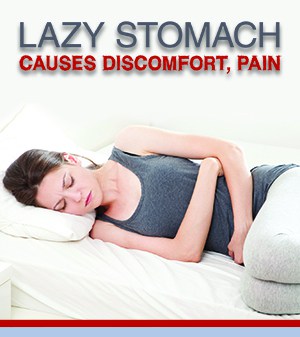 Some stomachs are too lazy to empty. If the stomach muscles – or the vagus nerve that controls them – have stopped working properly, they will not be able to move food into the small intestine as quickly as they should. People with this condition may feel full from eating small amounts of food. Worse, they may experience acid reflux, abdominal pain, bloating and vomiting. This unpleasant condition – gastroparesis – is commonly known as “lazy stomach.”

“Gastroparesis is basically a problem of the stomach not emptying well,” says Wilfred Lee, MD, gastroenterologist at Saint Francis Medical Center. “I usually tell people it’s a lazy stomach. You eat a little bit, you feel full already. After you eat, you still feel the food sitting there. Also, it’s a secondary reflux problem. Just imagine if the food doesn’t go away from the stomach. It’ll just back up and cause very bad reflux. In extreme cases, the food can mummify in the stomach into something called a bezoar, which acts like a big ball of food sitting in the stomach and causes extreme pain.”

Gastroparesis is commonly found in diabetes patients. For people without diabetes, the cause of the condition can be hard to pin down.

“We don’t always know what causes this lazy stomach,” says Lee. “Apart from diabetes, it can also be caused sometimes by an underactive thyroid, people taking pain medication that slows down their stomach, and chemotherapy, but that’s a little bit unusual. Oftentimes, we use upper endoscopy – a little camera at the very tip of a flexible scope – to make sure there’s no ulcer, blockage or other disease.”

Although medications have been developed to treat gastroparesis, Lee finds watching what you eat to be safer and more effective. “If you have a lazy stomach, it pays to eat low-fiber, low-fat foods to empty the stomach a little bit quicker,” he says. “In very serious cases, we ask the patient to take on more of a liquid diet, since liquid goes away three times quicker than solid food.”