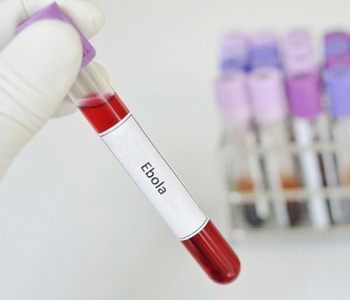 Ebola is a deadly virus that causes both internal and external bleeding. This year, West Africa has been experiencing the largest epidemic in history, causing worldwide concern over the virus.

Researchers believe that Ebola begins in an animal – such as a bat – and spreads to humans via contact with the skin or bodily fluids of the animal or another human. It can also spread via needle or syringe.

Symptoms of Ebola include high fever, headache, joint and muscle aches, sore throat, weakness, stomach pain and lack of appetite. After a patient is exposed to the virus, symptoms can occur anywhere from two to 21 days. Ebola is only contagious when the infected patient is experiencing active symptoms.

“These symptoms can indicate any number of different diseases,” says C. Edward LaValle III, MD, infectious disease specialist at Saint Francis Medical Center. “You need only be concerned if you have traveled to West Africa within the past 30 days. If you have stayed in the local region and are experiencing these symptoms, you are more likely suffering from the flu or another ailment.”

Doctors treat Ebola patients by providing intravenous fluids and electrolytes, making sure a patient’s oxygen and blood pressure levels are stable and treating other infections as they occur. The goal is to boost the patient’s natural immune system.

The Centers for Disease Control and Prevention (CDC) has begun screening travelers who are coming to the United States from West Africa at five different U.S. airports. If the travelers report or exhibit any signs of Ebola, they will be referred to public health authorities who will perform more tests. The countries that have been affected by Ebola are already screening all outbound travelers. “The best way to stop the spread of Ebola is to isolate those who are infected,” says LaValle.