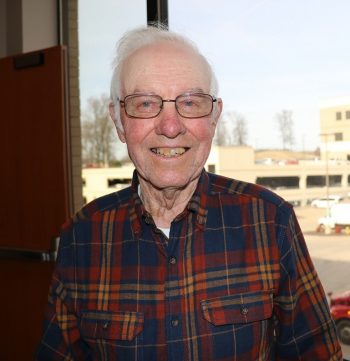 Leroy Murray is not afraid of a little manual labor. The 84-year-old man, from the small town of Harviell, Mo., worked as a lineman for 40 years and thanks to the TAVR heart procedure still raises cattle, splits wood and mows grass on his farm.

Leroy has had a few surgical procedures over the years. He had a GERD procedure 30 years ago to treat gastroesophageal reflux disease and back surgery 25-30 years ago. In 2003, the hardworking farmer had to undergo aortic valve replacement and double bypass open heart surgery and received a pacemaker post operatively. The doctor told him that fix would last about 15 years.

When his blood pressure started dipping out in 2019, Leroy went back to the doctor and found he indeed needed another procedure to help fix his heart – he needed another aortic valve replacement.

Leroy went to a local healthcare organization in Cape Girardeau and was referred to BJC Healthcare in St. Louis for further evaluation. After a battery of testing, he talked with his primary care physician, Dr. Michael Caldwell of Saint Francis Clinic Poplar Bluff who recommended him to the Structural Heart Team of Saint Francis for consideration of Valve- in-Valve transcatheter aortic valve replacement (VIV TAVR). By using a bioprosthetic transcatheter aortic valve (TAVR), he was able to have his heart valve replacement for a second time, but this time through only a small puncture in a vessel in the leg instead of a repeat open heart surgery procedure. He underwent successful Valve-in-Valve TAVR in June of 2019 which was performed by Steven J. Joggerst, MD, with Cape Cardiology Group along with the other members of the Structural Heart Team and was discharged home the following day with minimal restrictions.

“As a Structural Heart Team, we are so fortunate to be able to offer so many new, cutting edge technologies like TAVR, Valve in Valve, MitraClip, and Watchman, to our patients close to home,” said Dr. Joggerst. “The direction of our team has always been based on a commitment to quality care and quality outcomes and I feel we have remained vigilant in ensuring that our program successes are a reflection of that commitment.”

Transcatheter aortic valve replacement, or TAVR, is a minimally-invasive surgical procedure which replaces the valve without removing the old, damaged valve, including a failed bioprosthetic valve that has been previously replaced. Instead of cutting into the chest to replace the malfunctioning valve, the new valve is wedged into the existing aortic valve’s place.

The TAVR procedure is for people who have severe, symptomatic aortic stenosis of a native valve or who have a failing bioprosthetic valve from a past valve replacement surgery. Saint Francis Medical Center is the only local hospital performing Valve-in-Valve TAVR and performed their first VIV TAVR in September 2015.

“I’m so thankful we got to come here to Saint Francis and do that,” Leroy said. “It just went perfect and you could get it right here close to home!”

Leroy came to Saint Francis Medical Center at 9:30 am, had the surgery at 11 am, and was up and walking around that afternoon.

“I would recommend Dr. Joggerst and the Saint Francis team even to my enemies!” Leroy said. “Every nurse I had contact with was just as nice as he or she could be.”

He appreciates the consistency as well. He dealt with the same people all the way through surgery prep and the surgery.

“I truly think you get the best care at Saint Francis,” he said. “I did not meet a sourpuss nurse. If you’ve got to be in a hospital, I don’t know of a better place to go!”