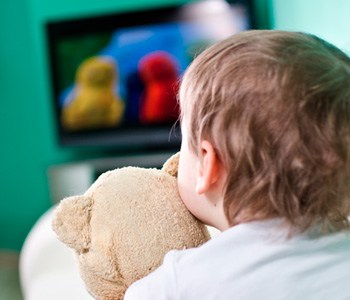 Studies have shown that children who watch violent TV shows are more likely to engage in violence themselves. That is why it is important not only to monitor children’s screen time, but also to limit it.

“Many parents use screen time as a babysitter and are not monitoring it as carefully as they should,” says Erica Westrich, APRN, FNP-BC, nurse practitioner at Cape Physician Associates, a Saint Francis Medical Partner.

“Young children should be watching educational programs rather than violent cartoons.”

Parents may introduce screen time between 18-24 months, but this should be limited and under direct supervision of a parent or adult. The American Academy of Pediatrics recommends that children younger than 18 months old should not be exposed to screen time at all, and children 2 years and older should have no more than an hour of exposure to screen-based devices (TV, tablets, phones, etc.) per day. “In addition to exposure to violence, there are many other reasons, such as the effect on their eyesight, why parents should limit screen time for their children,” says Westrich.

To make an appointment with Westrich or another Saint Francis pediatrician, call 573-334-9641 or learn more about Pediatrics at Saint Francis.