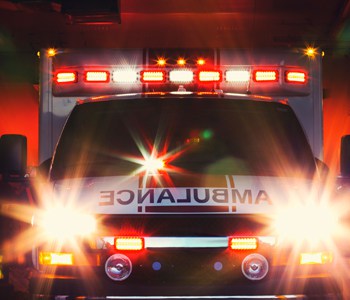 If Stephen Friar had not had an appointment with his neurosurgeon, he would have stayed at home – even though he was experiencing uncontrollable shaking and nausea, and redness and severe pain in his upper leg. If he had stayed put, he might never have known he needed medical care until his condition worsened.

Instead, Friar, 64, drove from his Ewing, Ill. home to see his neurosurgeon at Saint Francis Medical Center. The two were going to discuss treatment for Friar’s spinal stenosis, a condition that causes pressure on the spinal cord.

After Friar arrived, he showed his nurses the redness on his leg. They suspected an infection and brought in Friar’s doctor to see him, who called Saint Francis Medical Center’s emergency department and told them he was sending over a patient who needed immediate attention.

The emergency department saw him right away. Friar was suffering from cellulitis, a bacterial skin infection that can spread quickly. If left untreated, it can cause an infection of the inner layers of the skin and be fatal. “I had never heard of cellulitis before,” says Friar. “I have an artificial hip, and if the infection would have spread to that part of my body I would have been in big trouble.”

Friar spent about a week at Saint Francis as doctors treated him with antibiotics. “All the service I experienced was great,” he says.

“If I had not had an appointment that morning,” Friar continues, “I would have put off going to the doctor. Through a twist of fate, all the pieces fell in place at the right time.”

The incident is an example of how Saint Francis is able to transition patients seamlessly through the system. Our staff was able to shift gears from a complex spinal problem to an emergency issue and give our patient the treatment he needed.