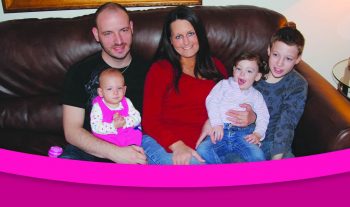 One blessed family has infinite reasons to be thankful for Saint Francis Medical Center’s Level III Neonatal Intensive Care Unit (NICU). Thanks to the wonderful care they received at this leading-edge facility, the whole Smith family is healthy and happy, even after two difficult pregnancies.

Jana and Rick Smith first learned that Jana had preeclampsia just hours before the delivery of their daughter, Addison. Preeclampsia is a condition that can cause complications such as low birth weight, premature birth and placental abruption.

A year later, when Jana was pregnant with their daughter, Avalyn, the couple learned that Jana had a different health concern: absent end diastolic blood flow. This condition increases the risk of fetal mortality as well as long-term neurologic damage.

Once again, on May 1, 2012, the physicians, nurses and support staff at the Level III NICU were able to deliver a baby girl. Born in the 30th week of pregnancy, Avalyn spent the next 51 days in the Level III NICU. “The entire staff in the Level III NICU is dedicated to getting premature babies the best care possible and has been doing so for over 10 years all over the region. It is a team effort,” says Karlyle K. Christian-Ritter, MD, FAAP, neonatologist and medical director of the Level III NICU at Saint Francis.

This time, Jana and Rick were not as afraid as before. “After receiving top-notch care with Addison, my husband and I were much less fearful with Avalyn’s stay,” says Jana. “We knew we were in good hands.” The staff was attentive to her family’s needs and helped figure out solutions every step of the way, including referring Jana to Cape Perinatology, a practice at Saint Francis that includes two full-time physicians that specialize in high-risk pregnancies.

This high level of care is what Saint Francis physicians like Jessica H. Lemmons, MD, FACOG – Jana’s obstetrician/gynecologist – have come to expect. “Even with difficult pregnancies, I am confident that families will receive the best care possible at Saint Francis’ Level III NICU,” says Lemmons.