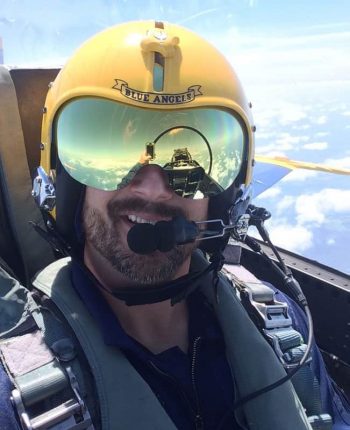 Saint Francis Healthcare System Athletic Trainer David Enderle had a once-in-a-lifetime experience when he had the honor to ride with the Navy’s Blue Angels in a F/A-18 Hornet jet.

The special ride happened on May 15 before the 2019 Cape Girardeau Air Festival the following weekend.

David was nominated because he is considered a key influencer in the area. He wrote a bio as part of the selection process. He had to get a physical to qualify for the ride.

“I got that call and I was super excited,” Enderle said after he found out he was selected for the ride. “I was honored to do it, very nervous, but also knew I couldn’t say no.”

His wife, three children and parents came out to the Cape Girardeau Regional Airport to watch him fly.

“The takeoff was the most exhilarating part,” David said. “The pilot is telling me the speed we’re going. All of sudden, I felt it.”

They climbed around 10,000 feet in a matter of seconds. “I thought my head was already back [as far as it could go,]” David said. “Nope, there’s a little more room to go. It pinned me back in my seat!”

They flew to Lesterville, Mo. in 10 minutes. That would be about a two-hour drive in a vehicle.

“There was one point he took us up to .98 mock speed,” David said. “That’s just under the sound barrier.”

The pilot turned on the smokestack and went for a loop. “A couple maneuvers that got me a little queasy were flying inverted and also hitting zero g’s like astronauts experience,” said Enderle.

They did maneuvers the Blue Angels typically do in an air show. A couple of David’s favorite maneuvers were the Half Cuban Eight and the Minimum Radius Turn where they hit 6.5 G’s. David had to use the “Hick Maneuver” which is an anti-G straining maneuver to keep from passing out.

They traveled at 650+ knots. That’s 748 miles per hour! His total flight time was about 45 minutes. It’s an experience David is sure not to forget.