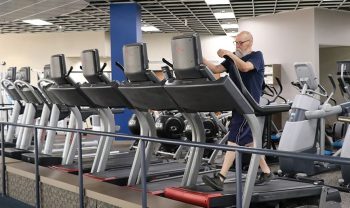 Paul Jones takes life one step at a time…literally. He’s an avid walker, but hasn’t always been that way. Several years ago, Paul was a 243-pound smoker with Chronic Obstructive Pulmonary Disease. He was hospitalized at Saint Francis Medical Center for eight days.

“My doctors told me I had to come through the Pulmonary Rehab Program here at Saint Francis Healthcare System,” Paul said. “I went through a six-week program. I knew at the end of the six weeks I wasn’t in good shape. So I joined the gym.”

Paul received a scholarship for his Fitness Plus membership so he could keep working out. The first six months he came to Fitness Plus, Paul pulled his oxygen tank around the track.

“And I probably didn’t miss a day for probably about four months,” he said.

After six to seven months of walking the track and eating healthier, Paul didn’t need to take as much medication or daytime oxygen. He also started shedding weight and has lost about 90 pounds so far.

“I was on full time oxygen at nighttime for another year, but I kept coming to the gym, walking and exercising,” he said. “I kept getting better and better.”

Despite the odds stacked against him, since he began working out at Fitness Plus and quit smoking he has improved his lung function by 14 percent.

“I can run, a little bit, not a whole lot, but I can still run,” Paul said. “Eight years ago, I could hardly walk.”

The scholarship to Fitness Plus provided Paul the opportunity to continue exercising and changed his life.

“I was lucky enough that when I got sick, I came to the right hospital,” he said. “I came to Saint Francis. And the people put me in the best care. They put me in the right direction with the right people. And I guess I was stubborn or had a good will. I wanted to survive. And I think I’ve done pretty good.”

Paul plans to keep walking at Fitness Plus to stay healthy. For nearly four years, Paul has tracked his steps and the miles he’s walked.

“I’m within 120 miles of having 10,000 miles in,” he said. It’s an accomplishment Paul never thought he could achieve a few years ago.

If you are interested in making a life-altering change, visit Fitness Plus at 150 S. Mount Auburn Road for a free tour or call 573-331-3355 for more information.