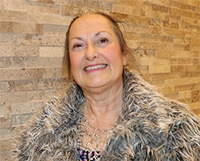 She started in the Cath Lab and was also responsible for conducting pulmonary function studies and stress tests. Harriett spent 30 years of being on call for the Cath Lab. Her manager and staff called her the “Stress Queen.”

“They (patients) were always glad to see you because they knew they were going to be taken care of,” Harriett said of her patients.

“Cardiology has changed so much,” Harriett said. “We have to be so proud of what accomplishments were made, not only the physicians but staff and the hospital for furthering cardiology treatment in our area.”

Saint Francis has become home for Harriett. One of her favorite memories from working at Saint Francis is singing Christmas carols in different areas of the medical center. She says as far as she knows there has never been another person named Harriett who has worked for Saint Francis.

“Retirement is something everybody looks forward to,” she said. “It’s a bittersweet thing to have to leave.”

In retirement, Harriett plans to travel, visit family in Florida and Texas and have some fun.