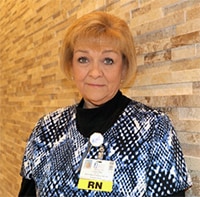 Pfau graduated from St. Luke School in St. Louis and went to work at Saint Francis on April 12, 1976. She started as a staff nurse out of college and worked in mid-surge for one and a half years. Then, she moved to the Emergency Department and never looked back.

“I liked not knowing what was going to happen,” Pfau said about working in the ED, where she became a jack-of-all-trades.

Pfau says she holds the distinction of being the first trauma nurse specialist in the southeast Missouri region. “I just love the atmosphere,” she said. “There are good outcomes and bad outcomes, but the good outweigh the bad.”

She won the Missouri Emergency Nurse Association’s Nurse of the Year Award. It is an award nominated by her peers.

“I wouldn’t change anything,” she said. “I’ve enjoyed every minute of it.”

In retirement, she plans to spend time with her two children and two grandchildren and vacation at Kentucky Lake. Pfau’s last day at Saint Francis Healthcare will be January 18, 2019.