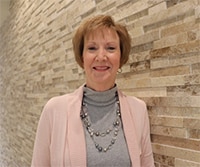 Austin started at Saint Francis in August of 1984 after earning her business administration degree from Southeast Missouri State University in 1978.

She started working as a transcriptionist. She also worked with what was then called the Crippled Children’s Clinic, MDA Clinic and helped start a foot clinic.

Austin began her current position of office manager in August of 1994 when Saint Francis Healthcare relocated outpatient rehabilitation and it became a separate department.

“I enjoyed the challenge of helping plan and implement all that went in to creating a new department,” Austin said.

She was instrumental in assisting with the hiring of staff, designing front office work flows, and coordinating the move off campus during that time.

“It’s amazing how you can help people with therapy,” Austin said. “You’ll see a patient come in and they’ve been in a wheelchair and sometime later they’re walking out.”

She says she will miss all the friends she’s made through the years and the patients and their families who have come and gone.

“It’s been a great place to work,” she said.

In retirement, she plans to spend time with her husband, parents, two children and two young grandchildren.