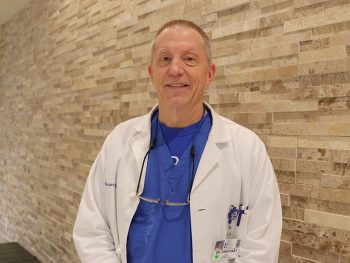 Charles Pancoast, MD, is retiring after serving for more than 31 years in the Emergency Department at Saint Francis Medical Center.

Pancoast joined Saint Francis in December 1988. Prior to that, he served in the United States Air Force. He earned his medical education from the University of South Dakota and completed an internship at McKennan Hospital in Sioux Falls in 1981.

Pancoast has helped save many lives in his role in the Emergency Department. He treated thousands of patients throughout his career and not only was a staff provider but also served as the Medical Director during his tenure at Saint Francis.

He says the two things he will miss most during retirement are taking care of the patients and working with his colleagues. “I am thankful that I was able to work with good people including everybody in the Emergency Department – the doctors, nurses, administrative partners, respiratory therapists – everyone. Saint Francis has always made sure we had good people working in the Emergency Department.”

“Dr. Pancoast has a fire for patient care,” said Chad Garner, RN, BSN, CEN, Director of Emergency and Trauma Services at Saint Francis. “He provides the best care with incredible speed. He takes the time to communicate with patients so they know exactly what to expect, and he closes the loop with face-to-face follow-up. It has been my pleasure to get to know Charlie. He will be missed!”

Carla Crump, RN, Manager of Emergency Services, worked with Pancoast for more than 20 years and echoed Garner’s sentiments. “He is hands down one of the best clinicians I have ever worked with,” Crump said. “He can rapidly assess the patient and determine what needs to be done. When he reaches a diagnosis for the patient, he takes the time to go into the room and explain to them exactly what he thinks and the plan of care. The patients love him. Other providers never doubt him or give him pushback because they are aware of how competent he is. Besides his skill, he has also been a treasured friend to many – staff, providers and members of the community. Words cannot express how much he will be missed in the Emergency Department.”

In addition to his skill and excellent bedside manner, Pancoast has been very generous to Saint Francis Foundation.

“Dr. Pancoast and his wife Cathy have been tremendous supporters of the Foundation since they arrived on campus,” said Jimmy Wilferth, Vice President of Foundation and Marketing at Saint Francis Healthcare System. “Through their support, literally hundreds of patients and our Saint Francis colleagues have been blessed in numerous ways. Never in it for the glory or recognition, the Pancoasts truly depict that ‘servant’s heart’ we are all called to have. What fantastic examples!”

His last day at Saint Francis was April 11. In retirement, Pancoast plans to go on a mission trip in June. He will also continue training for Iron Man triathlons. Congratulations on your retirement, Dr. Pancoast!