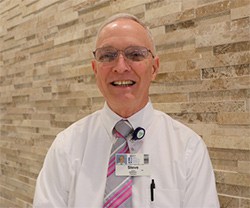 After Smith graduated from the University of Missouri – Kansas City School of Pharmacy, he came to work at Saint Francis in July of 1978.

Smith started as a staff pharmacist and is now the inpatient pharmacy manager. He has seen a lot of change including a move towards quality and safety and the expanded role of the pharmacist.

He is most proud of working to make sure the pharmacy has the right process in place to emphasize safety and quality.

Smith says he will miss the people he works with the most.

“Being here 40 years there have been a lot of people who have come and gone,” Smith said. “When I meet with my employees, I tell them my job is to make them successful.”

In retirement, he plans to spend time with his wife, two daughters and two grandchildren.