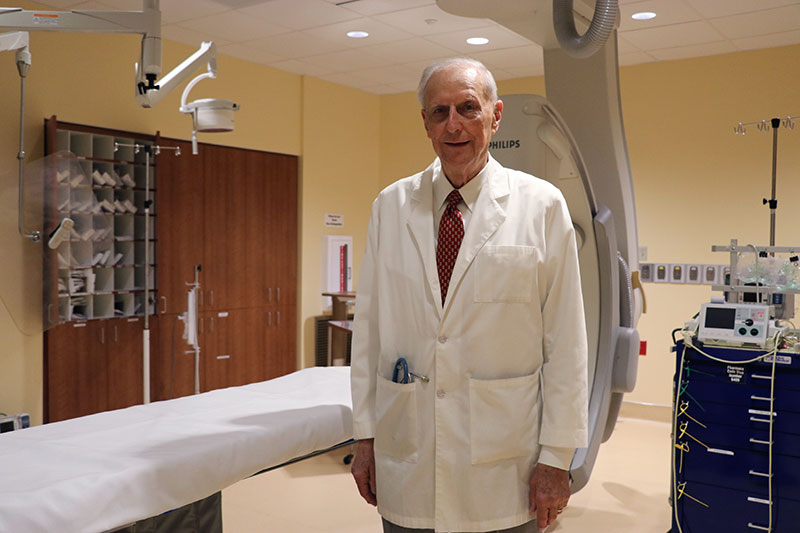 Clifford R. Talbert Jr., MD, FACC, recently celebrated a significant milestone in his career that has spanned more than half a century.

Talbert has been practicing cardiology at Saint Francis Healthcare System for 54 and a half years and continues to practice at Cape Cardiology Group. He performed his last procedure in the Cath Lab in November 2019 racking up more than 30,000 cardiac catheterizations in his career.

Graduating from Washington University Medical School in 1959, he completed his residency at Barnes-Jewish Hospital of St. Louis in 1962 and fellowship at University of Missouri – Columbia School of Medicine in 1963. After his service to the military, he began his career as a cardiologist in July 1965 at Saint Francis Medical Center.

Talbert says when he first started practicing, “cardiology was in its infancy.” There were almost no tools available to diagnose or treat the cardiac patient. “There were no blood thinners for heart disease,” he said. “There was no way to stop a heart attack. There was no cardiac monitoring available. The hospital had EKG, but no stress testing.” Talbert has seen healthcare evolve tremendously since he first started practicing.

“As new advances came along, I worked to get certain procedures or equipment in here,” he said.

In 1966, Saint Francis Medical Center established four beds for the Coronary Intensive Care Unit, the first such unit in southeast Missouri. That is when Saint Francis started monitoring patients with EKGs, and in the hospital, CPR training and treatment became available. Saint Francis nursing staff were instrumental in training of cardiac intensive care and cardiac catheterization laboratory work.

“There is more to be done,” Talbert says reflecting on his career. “The main objective is for the patient to be able to function. My advice to patients is not to give up just because they are older. They can survive and thrive at any age.”

He states, “The entire staff at all levels at Saint Francis have been co-developers of cardiology advancement over the last 50 years and continue to do so.”

Thinking about his career, he says, “It’s still fun work.” While he will no longer perform the 20-30 procedures a month he once did, he will continue to perform patient care throughout the Medical Center.

Thank you, Dr. Talbert for your many years of dedication and innovation at Saint Francis Healthcare System!