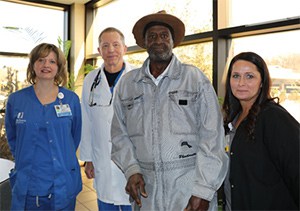 A man is alive today thanks to the quick work of the Saint Francis Healthcare emergency team.

Dwight Vaughn, 68, came to the Saint Francis Healthcare emergency room Friday, November 9 after someone where he lives in Cairo, Illinois called 911.

He knew something was wrong because he had experienced two prior strokes.

“I didn’t think I was going to make it,” Vaughn said.

Nurse Tiffany Winter said when Vaughn arrived to the emergency department, she immediately suspected he was having a stroke because he showed the visible signs of a stroke and could not talk. After some testing, Dr. Charles Pancoast says Vaughn had blockage in his basilar artery.

“If we hadn’t been there, he would be in a nursing home or worse,” Dr. Pancoast said.

Mr. Vaughn was airlifted to SSM St. Clare for removal of the brain clot.

“The quicker you seek treatment, the more chance you have for the brain tissue to survive,” Dr. Pancoast said.

After recovering in St. Clare, Vaughn returned to Saint Francis Healthcare for inpatient rehabilitation therapy. He is now living at home. Vaughn plans to continue enjoying retirement and spending time with family.