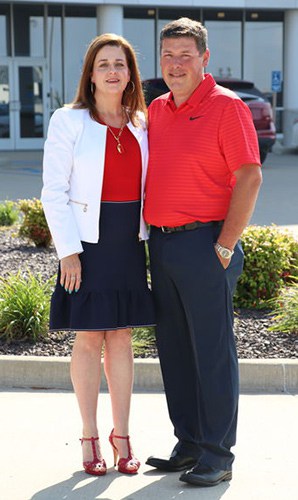 Tamara and Chadd chose The Healthy Weigh program when they decided to embark on a new, healthy lifestyle. Tamara underwent treatment for breast cancer, which left her feeling unhealthy and helpless. Chadd decided to join, not only to support her, but to increase his own health as well.

Even though he was able to do all the things he wanted to do in his life before joining, Chadd now notices that those activities require much less effort. “I was able to lose 73.5 pounds in 24 weeks, which amazes me still that I averaged three pounds per week.”

Not only are things easier, but he no longer suffers from acid reflux, sciatic nerve pain, and he “no longer dreads exercise!”

Tamara, about 40 pounds down, has found joy in being able to work out harder with more endurance, especially in her Pilates practice. While she said she felt unhealthy and “a little helpless” before losing weight, she now finds herself with more energy and confidence, and just feeling happier.

Tamara and Chadd anticipate a healthier future together as soon-to-be husband and wife. They have a beautiful beach wedding planned for March. “I can’t wait to wear my wedding dress and feel fabulous in it,” said Tamara.

At The Healthy Weigh, we have found much joy over the last several months working with Chadd and Tamara. Both bring a fresh perspective and abundant energy to our classes. They found that the classes helped them as well, especially the structure, and accountability, and the ideas from other people you meet in class.

Deciding to join a program to lose weight is a big deal, and both emphasize the importance of making a commitment to yourself. “This program is no joke,” Chadd says. “If you are committed, you will succeed.” Tamara gives us encouragement to start fresh each day. “No matter the circumstance, each day is a new day to start a healthier life.”

Another successful power-couple grabbing life by the horns. Great job, Chadd and Tamara!