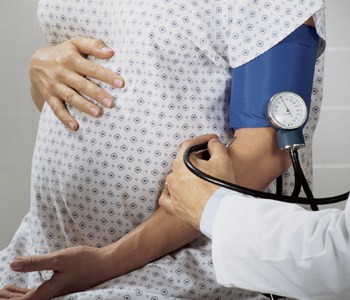 Hypertension, or high blood pressure, can be very dangerous for a woman who is pregnant. There are two main types of hypertension issues in pregnant women – those who develop it as a part of a condition called preeclampsia or “toxemia” and those who have hypertension before becoming pregnant.

“Preeclampsia is a disease that is unique to pregnancy,” says Naomi L. Wahl, MD, FACOG, perinatologist at Saint Francis Medical Center. “It is most common in women who are having their first baby, but is also seen in women who have high blood pressure preceding the pregnancy, diabetes or gestational diabetes, and in women who are having a multiple gestation. Symptoms can include swelling that can be very sudden in onset, headaches that are not relieved by Tylenol®, and even nausea and vomiting the last three to four months of pregnancy.”

A woman who develops preeclampsia needs to work with her obstetrician, sometimes in concert with a perinatologist to determine the best timing of delivery. Preeclampsia can be life-threatening for both the mother and the baby. The mother can have problems, which include seizures, as well as kidney and liver problems. The baby can have problems including too little growth and premature delivery and the associated risks.

While pre-existing hypertension for a pregnant woman can also be dangerous, it is treatable when properly monitored. “Ideally, every woman would see her doctor prior to becoming pregnant to make sure that medications and other health issues are addressed to ensure a safe pregnancy is planned,” says Wahl. “Of course, that does not happen all the time. It is important that every woman sees a doctor early in her pregnancy. If she does have high blood pressure, she may need a different medication or may be able to stop her medications during the pregnancy. She also needs her kidney function assessed at the beginning of the pregnancy to help with management closer to term.”

Both women with preeclampsia and those with pre-existing hypertension can be at an increased risk to require a cesarean section for delivery. They are also at increased risk for abruption, a complication in which the placenta starts to separate from the uterus before the baby is born. This can be life-threatening for both the mother and the baby.

“If you have hypertension, it is important to receive regular prenatal care. Be aware of concerning symptoms. Follow the instructions given by your obstetrician and perinatologist. We want to optimize the outcome for you and your baby,” says Wahl.