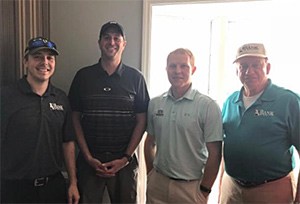 Winners of the morning championship flight were sponsored by the Bank of Missouri. From left to right: Jeff Hotop, Aaron Panton, Blake Driskell, David Crader

More than 180 golfers and 45 volunteers turned out for The Friends of Saint Francis Golf Tournament on August 17 at The Cape Girardeau Country Club. The tournament raised more than $155,000 and will benefit community efforts to feed hungry children in our area.

Winners of the morning championship flight were sponsored by The Bank of Missouri and they are: Aaron Panton, Blake Driskell, David Crader, and Jeff Hotop. The second-place team consisted of Dr. Colleen Moore, Mark Moore, Tim Williams, and Tanner Werner. Third place winners were sponsored by Blattner Steel and they are Rick Blattner, Adam Bertrand, Mark Wittenborn, and Trevor Blattner. 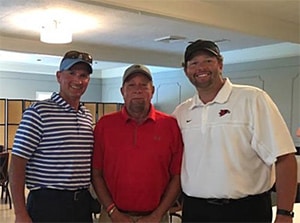 The Friends support the Healthcare System, its patients and their families; give back to the community through service; and transform lives for the better.