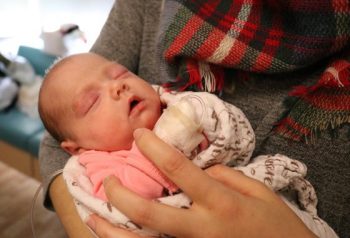 Baby Jovana is held by her mother in the NICU at Saint Francis Healthcare.

Baby Jovana, which means “God is gracious,” was born early at 27 weeks. She was a mere 2 pounds 11 ounces when she was born and dropped down to 2 pounds 2 ounces at her lowest weight three days after birth.

Taylor had hemorrhaging in mid-September and was admitted to the medical center five times before the baby was born on October 18.

“We trusted in the Lord from day one,” said Joey Babich, Jovana’s father. “She was just a miracle baby.”

After baby Jovana was born, a scan showed she had a Stage 4 brain bleed which is a severe bleed.

“It became real to us when the NICU doctors said, ‘Here are all the things that could go wrong,'” Joey said.

Joey says they had thousands of people praying for their new baby.

“We just had peace that no matter what, it was a gift to us,” said Taylor Babich, Jovana’s mother.

Joey says when doctors redid the scan, they told them, “‘You can pick what you want to believe. Either the scan was wrong or we witnessed a miracle.’ We think that the Lord answered that.”

They also praise the doctors who treated Taylor to help her heal after delivery.

“It’s been a great experience,” Joey said. “If we had her elsewhere they would have flown us to St. Louis.”

Joey and Taylor said it’s been an “awesome and glorious road” and they were excited to bring their new daughter home to be their two other children after 10 weeks in the NICU.