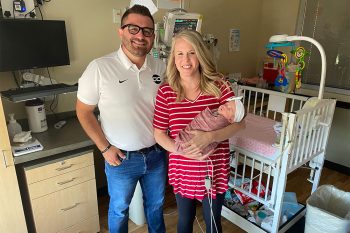 Saint Francis Healthcare System is proud to provide the region’s only Level III Neonatal Intensive Care Unit (NICU). The NICU features 18 beds, a variety of advanced medical technology and a staff who works to treat each baby and family with compassion, love and care throughout their entire stay.

Tiffanie and Nick Grassi of Jackson experienced a longwinded NICU stay at Saint Francis when their daughter Emersyn was born three and a half months ahead of her scheduled due date.

At only 22 weeks, Tiffanie’s water broke. She was immediately admitted into Family BirthPlace at Saint Francis and warned that her condition fell within the less-common, 10 percent of pregnancies which continue longer than one week after the water breaks. At the time, baby Emersyn had a 50/50 chance of surviving.

After a three-week stay in Family BirthPlace, Tiffanie gave birth to Emersyn at 25 weeks and 6 days. Emersyn weighed just under 2 pounds. According to her parents, Emersyn’s early arrival and small size classified her as a “micro premie.” Both factors would require Emersyn to stay in the NICU for more than four months.

The Grassis commented “Everyone [was] more than patient and willing to help [them] understand different things,” throughout Emersyn’s stay in the NICU. Along with this patience, the staff also involved the parents in the decision making regarding Emersyn’s care, which helped them feel empowered.

The family made many transitions: Beginning their stay in Family BirthPlace, moving to the NICU and later being readmitted into Family BirthPlace following some complications. Through the chaos, constant changes and relocations, the Grassi’s recall how Saint Francis colleagues checked on them, even when baby Emersyn was under the care and watchful eye of a different staff member.

Over time, the Grassi’s became friends with the medical staff. The parents truly felt “like everyone loved [Emersyn] and treated her like she was their own.” Nick also recognizes the significance of knowing Saint Francis colleagues through the community and seeing the various ways they helped his family in its hardest time.

After 25 days in the Family BirthPlace and more than120 days in the NICU, baby Emersyn was finally able to go home and meet her older brother, sister and grandparents. Thankful for the care they received at Saint Francis, the Grassi’s state “It’s the best that it could be in this type of situation.”

The Saint Francis Foundation fund Parents With Hope provides transportation, lodging and meal vouchers to families with infants in our Level III NICU. You can help support this Mission by donating today.