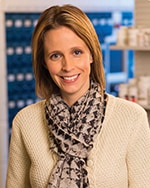 Saint Francis Healthcare System is pleased to announce that Sarah Mirgaux has been promoted to Director of Pharmacy Services.

She has served as Interim Director of Pharmacy Services since October. Mirgaux began her career at Saint Francis as a staff pharmacist in May 2001 and worked her way up to her new position. In March 2004, she was promoted to Pharmacy Manager and Pharmacist in Charge at Healing Arts & Specialty Pharmacy.